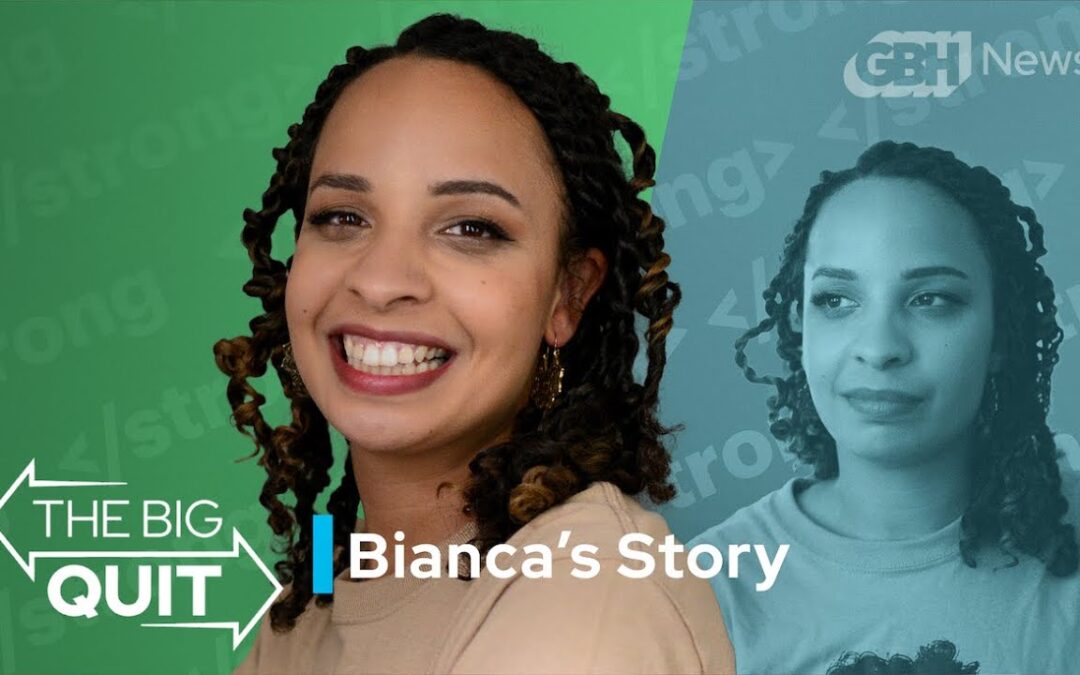 Bianca Blakesley remembers exactly when her “I quit” moment hit. The 29-year-old clinical social worker from Boston’s Mattapan neighborhood had just received an email from her boss in May, outlining a “responsible and safe” return to the office after more than a year of remote work.
“And I read that email and I felt such trepidation about going back to the same routine I had been in pre-pandemic,” Blakesley said. “And I thought, ‘No, I’m not going back.’”
She wasn’t worried about getting sick, and knew the value of her work counseling college students through everything from homesickness and roommate conflict to thoughts of suicide and severe mental illness. It was rewarding but exhausting work and the intensity of the job had been sapping her energy for years.
“I would be spending all of my social energy at work and then not having enough for my social life when I came back home or my personal relationships,” Blakesley said.
When college campuses shut down in the pandemic, the stress deepened. Many of Blakesley’s students were in crisis — dealing with mental health problems and issues of basic survival including homelessness.
“Everything intensified and the job, you know, got harder. It was more demanding and I felt like it was just using up more energy,” she said. “And I was noting and noticing a difference in my health, like just being chronically fatigued.”
Yet the pandemic brought one “silver lining” for Blakesley: remote work. It gave her control over her schedule and more personal time with family. And while working from home, she began to ponder a major career change. She had no idea what she wanted to do, but knew her new work had to be meaningful, just like her counseling.
“I used to say, ‘I’m seeking a change of career, not a change of heart,’” Blakesley said.
But with a master’s in social work and a load of student debt, Blakesley felt “stuck.” Then she remembered coding courses she’d enjoyed earlier in her education. After some attempts at learning on her own, a friend recommended Boston-based “Code Squad” — a free, intensive coding boot camp geared towards people of color and women.
“I really wasn’t about to go into, you know, the tech industry and hang out with a bunch of, like white tech bros,” she said. “That’s just not me. And that wouldn’t make me feel comfortable or welcome.”
To Blakesely, who is Black, Code Squad felt like “an open door.” And once she started taking classes in January, she found herself wanting to code even on her days off.
By the time her boss sent the email outlining a planned return to the office, Blakesley had nearly completed the Code Squad course and reached a turning point She didn’t want to give up her new lifestyle, and she no longer wanted a job that demanded so much of her personally. In July she quit the job she’d seen as so much a part of her identity.
“I thought this is what I’m going to do for the rest of my life, even since undergrad, I thought ‘I want to be a therapist,’” said Blakesley. “And the reality was it was not a sustainable career for me.”
As a study project at “Code Squad,” Blakesley created the “Natural Hair Directory,” a map-based directory of hair salons and stylists in Greater Boston that cater to Black and natural hair. She wanted to help salons that had been impacted by the pandemic, but also wanted to fill a deep need.
“Because if you have curly or natural hair, it is shockingly very difficult to find a salon that knows how to do your hair and respects your hair,” Blakesley said.
With her app up and running, Blakesely wants to expand the directory to cover Massachusetts. And she’s amazed at her own achievement.
“When I’m looking at the code, I’m like, ‘Oh, my God, this is huge,’” said Blakesley, “I’m so proud of this thing.”
Now fully launched into freelance web design focusing on grassroots organizations, Blakesely took stock of the great leap she made.
“You know, long story short,” Blakesley said, “it did take a lot to let go of a previous career, and realize it’s OK to make a career change at any stage in your life.”