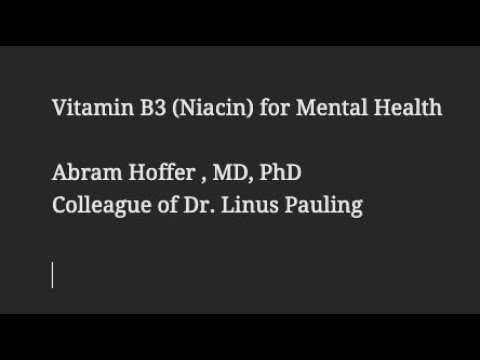 Abram Hoffer, MD, PhD (1917-2009), a founder of Orthomolecular Medicine, (with Double Nobel Prize Winner Dr. Linus Pauling) was a world-renowned Canadian doctor and biochemist that treated over five thousands of patients with mental disorders (including schizophrenia, drug/alcohol addiction, psychosis) through better nutrition , micronutrients, and megavitamin therapy. Dr. Abram Hoffer, a pioneer of holistic nutritional/vitamin therapy, died in May 2009 at the age of 91. For over 50 years, Dr. Abram Hoffer personally took 4,500 mg (4.5 grams) of Niacin (Vitamin B-3) along with other supplements. Dr Abram Hoffer was a prolific researcher and writer, wrote over 30 books and 600 peer-reviewed medical journal articles (most of which were ignored by mainstream medicine) and was productive until 2 weeks prior to his death (age 91).

2) Multivitamin (without iron) , once a day

GRADUAL DOSE:
For Vitamin B3, start with 250 mg Vitamin B-3 (niacin) daily after a meal for 7 days, then gradually increase the dose at seven day intervals, over four to six weeks, to reach the target dose of 1 gram
three times per day.

NOTE: Vitamin B3 (in form of Niacin) may cause a “warm pleasurable flushing” sensation in face or hands, at the beginning of use – this flushing is safe and many people enjoy this “warm sensation”. It might take 3 to 4 weeks to see results.