How to Understand and Treat Psychosis 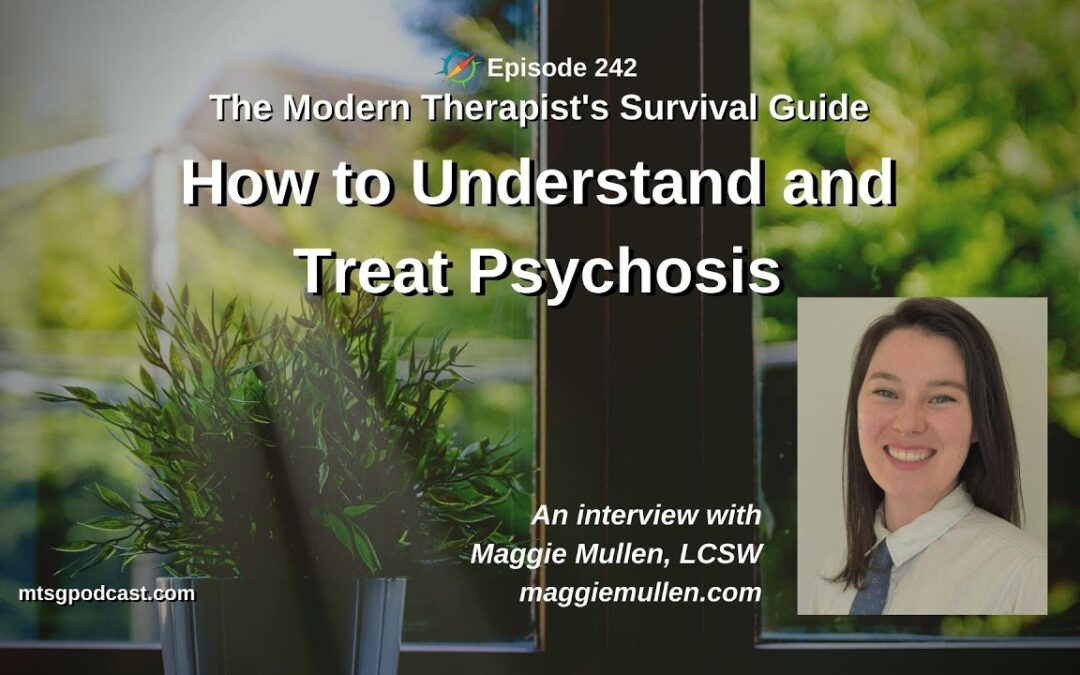 How to Understand and Treat Psychosis: An interview with Maggie Mullen, LCSW Curt and Katie interview Maggie Mullen, LCSW, a national trainer on culturally responsive, evidence-based care for psychotic spectrum disorders. We talk with Maggie about their anti-racist and disability justice framework of psychosis, understanding psychosis on a spectrum, what to do when psychosis enters the treatment picture, assessment of psychosis, and treatment using Dialectical Behavior Therapy (DBT). We also talk about how society defines “normal” and pathology, exploring cultural differences in these definitions.

Interview with Maggie Mullen, LCSW Maggie Mullen, LCSW (they/them) is a clinical social worker, national trainer, community activist, and author of The Dialectical Behavior Therapy Skills Workbook for Psychosis. Maggie specializes in culturally responsive, evidence-based care for psychotic spectrum disorders, trauma and PTSD, the LBGTQ+ community, and formerly incarcerated people. As a training director at Kaiser Permanente, they take great pride in mentoring, training, and supervising the next generation of social workers. You can find them online at www.maggiemullen.com

In this podcast episode we talk about looking at psychosis differently We started the conversation on psychosis when we were looking at conspiracy theories. We know that folks who believe in conspiracy theories and those who have a diagnosis of psychosis are different, but knew that we needed a deeper dive into how to understand and treat psychosis. We dig deeply into this conversation in this week’s podcast episode:

Maggie Mullen’s anti-racist and disability justice framework of psychosis “People with psychosis [are] being overly institutionalized… over medicated or highly focused on medication as the sole treatment. And particularly for our… black, indigenous, and folks of color experiencing psychosis, and people who are being shot and killed by police… when they’re out responding to their symptoms in a public way, or being incarcerated and not receiving treatment.”

The continued segregation of psychotic disorders Cultural considerations when determining what is psychosis or other types of experiences The lack of inclusion of psychosis in the research Psychosis is not “other” but is actually a spectrum of behaviors and are very common The symptoms of psychosis are not constant, they fluctuate for every individual The importance of following the model and voices of the disability justice movement Including education on the treatment for psychosis, rather than allowing therapists to opt out Folks with psychosis are often not included in the research, which needs to change What to do when psychosis comes into the treatment picture for our clients “The reality is there are wonderful outcomes, I think, for people with psychosis, when we look at it from a different perspective. Which is to say – what if some of the work might be on changing your symptoms themselves? But what if part of the work is actually on accepting your experiences so that you can just experience less stress with them?”

We need more training on psychosis to feel confident Normalizing the experience of psychosis Helping to make peace with psychotic symptoms (i.e., making friends with the voices) to decrease distress Looking at treatments beyond medication How to identify psychosis and assess for impact and impairment The myth that all elements of psychosis are distressing and bad Why Maggie Mullen is using Dialectical Behavior Therapy (DBT) to treat psychosis “People with psychosis deal with emotion dysregulation, actually more so than the average person…that’s where we know DBT is really effective”

We frequently underestimate the ability to help folks with psychosis Using DBT skills for emotion regulation concerns that frequently come up in psychosis Psychosis and PTSD oftentimes occur together and aren’t always diagnosed Trauma can influence the onset of psychosis AND psychosis can be traumatic Maggie’s pilot program with DBT for psychosis The concrete and straight forward nature of DBT skills make them very accessible Understanding psychosis differently, including the cultural differences of what is “normal” How to identify what is “real” and what is psychosis How do you define what is normal for someone? What do we decide what we pathologize? Breaking up the binary of normal or not normal – reframing as “experience” The importance of understanding…